In late 2011, West Central Wisconsin Regional Planning Commission (WCWRPC) applied for and was awarded a Building Blocks for Sustainable Communities grant from the U.S. Environmental Protection Agency. This was one of only 10 grants awarded throughout the United States. The grant allowed WCWRPC to partner with the Project for Public Spaces (PPS) to conduct placemaking exercises in two local communities. This article provides an overview of placemaking and summarizes the results of a local placemaking exercise.

Placemaking is a multi-faceted approach to the planning, design and management of public spaces. Simply put, placemaking allows people to make extraordinary improvements, big and small, in their communities. It involves looking at, listening to, and asking questions of the people who live, work and play in a particular space to discover their needs and aspirations. This information is then used to create a common vision for that place. The vision can evolve quickly into an implementation strategy, beginning with small-scale, do-able improvements that bring immediate benefits to public spaces and the people who use them. Placemaking can be used to improve all of the spaces that comprise the gathering places within a community – its streets, sidewalks, parks, buildings, and other public spaces. The goals of placemaking are to invite greater interactions among people and to foster communities that are more socially, physically, and economically viable.

What Makes a Great Place?

Great public spaces are the “front porches” of our communities. They are spaces where celebrations are held, social and economic exchanges take place, friends run into each other, and cultures mix. They are spaces where we interact with each other and government. When these spaces work well, they serve as a stage for our public lives. What makes some spaces succeed while others fail? In part, it is having a variety of things to do in one spot. When a space becomes more than the sum of its parts, it becomes a place. For example, a park with a fountain, a playground, a place to get something to eat or drink, and a spot for parents to sit in the shade is likely to attract people who will stay for more than a few minutes. If a nearby library featured an outdoor storytelling area for kids and exhibits on local history, people would likely come to both places and return again and again. Proximity to residential areas and easy access to a bus stop or bike trail are additional components that add up to create a successful place.

Four Attributes of a Successful Place:

In evaluating thousands of public spaces around the world, PPS has found that successful places feature four key qualities: they are accessible and have linkages to other places; they actively engage people in a variety of activities and uses; they are comfortable and have a good image; and they are sociable – meaning they are places where people meet each other and bring visitors. PPS developed the Place Diagram on page 3 as a tool to help people judge a place using the four key qualities of a successful place. Imagine the center circle on the diagram is a specific place that you know: a street corner, a playground, or an area outside of a building. You can evaluate that place according to the four criteria in the orange ring. The green ring shows a number of intuitive or qualitative aspects by which to judge the place. The blue area shows quantitative aspects that can be measured by statistics or research. This is one of many tools used by PPS to evaluate the success of local places. 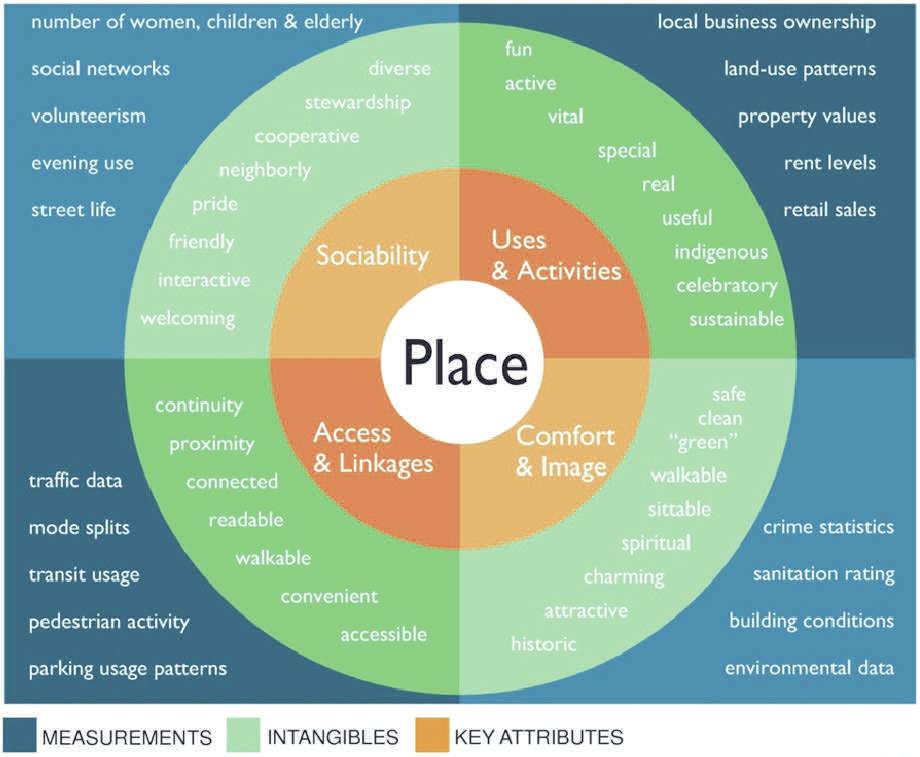 Applying the Principles of Placemaking:

On July 10, 2012 WCWRPC and PPS conducted local “Placemaking” workshops in the City of Owen and Village of Colfax. These communities were identified as candidates for
local placemaking exercises because of their commitment to improve their downtowns as expressed in their comprehensive plans. During the three-hour workshops, participants received an overview of placemaking and split into teams to conduct on-site evaluations of four key nodes within their communities. Each team identified short and long-term
opportunities to improve the space, along with potential resources to work with. In addition, WCWRPC staff went to a high school class in each community to discuss what students
liked, disliked, and what their visions were for their community. The next day, WCWRPC and PPS hosted a regional “Power of 10” workshop for the west central Wisconsin region. The “Power of 10” tool was developed to analyze the strengths and weaknesses of a community based on the premise that a great place must offer at least 10 things to do or 10 reasons to be there. At the regional workshop, participants reviewed the local placemaking exercises, participated in a regional assessment of the seven-county region (Barron, Chippewa, Clark, Dunn, Eau Claire, Polk, and St. Croix counties), and were given tools to take back to their communities.

At the conclusion of the community meetings, WCWRPC created a report for each community summarizing the results of the local placemaking workshops and offering tips for moving forward. Following are some of the recommendations provided for the Village of Colfax.

The full report can be found at: www.villageofcolfaxwi.org/wp-content/