While the WPR region is known for its vast and picturesque open spaces, high mountain ranges, deserts, and grasslands, other issues and trends are overshadowing our western landscape and dominating its headlines. One trend has been a dramatic increase in population as the rate of growth in the West has exceeded the national average for the last four decades. As William R. Travis notes in his 2007 book, New Geographies of the American West, between 1990 and 2000 five Western Planner states (Nevada, Arizona, Utah, Colorado, and Idaho) were the fastest-growing in the nation. The rate of growth for these five states as a whole was almost three times the national average (37 percent for the five western states versus 13 percent for the entire U.S.). We are likely to see similar results with the 2010 Census, and demographers agree that this trend will continue well into the future. Where and how these new residents will be accommodated becomes the question for planners everywhere in our region. Belying the illusion of vast open spaces in the West, as a location for new growth, is the fact that nearly half of the land in our states is federally owned, restricting where and how residential development can occur.

Exurban development is one prevalent land use pattern that has accommodated, thus far, a fair number of newcomers to our region. Exurbs are defined as large-scale permanent settlement patterns by urban people in non-metropolitan areas beyond typical commuting distances, typically on lots ranging from one to 40 acres. This development type blurs the distinction between suburban and rural; a settlement type characterized by more land consumption per capita and a mix of populations and housing.

In fact, nationwide, exurbs account for ten times the amount of land in urban and suburban uses(Travis, 2007). The exurban land use pattern is manifested in a variety of ways in WP country—through formal subdivisions, master-planned communities, 40-acre surveys or lot splits. But it usually starts with large acreages of farm or range land being broken up for development.

Build-out densities are dictated by local zoning and/or state subdivision regulations. This development pattern and its impacts may not be unique to our area. However, because of the vast open spaces in our region and the long distances people are willing to live from metropolitan areas, exurban settlement patterns exacerbate “vehicle miles traveled” or VMT, a telling indicator of potential carbon emissions in terms of personal vehicle use, energy consumption, and the construction of new roads to accommodate traffic.

In spite of its low density and many residents’ commitment to living lightly on the land, the compounded effects of the exurban development pattern are difficult to overcome. The wide dispersal patterns of houses, utility corridors, roads, driveways, fence lines, household pets, and nonnative vegetation create “zones of influence” that fragment landscapes, disturb wildlife habitat, and disrupt or exacerbate natural processes like flooding and fire. Also, these areas are often more expensive for local governments to service. Not only are homes widely dispersed, but many residents of these areas are transplants from urban or suburban areas who expect a higher level of governmental services than do traditional rural residents.

In addition, a proliferation of septic systems can create a dangerous build-up of nitrates in the soil that threatens potable water supplies. Therefore, dispersing new residents over vast expanses of ranch and agricultural lands is not in the best interest of either current or future generations. The challenge is how to accommodate these newcomers in ways that are sustainable, affordable, economically viable, energy and water efficient, but that also protect rural character, agricultural resources, and the environment. Conservation subdivisions are one alternative to traditional development that local governments may offer to balance the potential influx of new residents with the conservation of open space, scenic vistas, and agricultural lands. 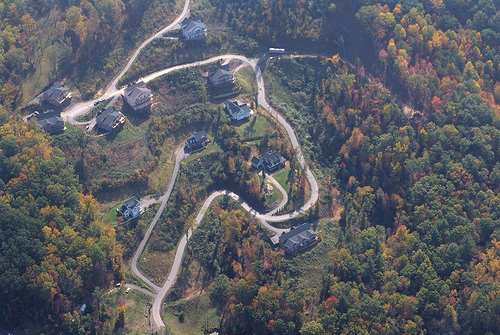 Conservation Subdivisions – Not a New Idea

The concepts behind conservation subdivisions date back over 40 years to Ian L. McHarg’s seminal book Design with Nature. In this book, architect McHarg put forth ideas on how the built environment and nature can be integrated in ways that maximize benefits to both. Randall Arendt, in his 1994 book Rural by Design, took these ideas further by proposing design standards for conservation subdivisions – residential subdivisions designed to maintain as much open space as possible without compromising on the number of houses that may be legally built. In 1996, Arendt followed this landmark book with Conservation Design for Subdivisions where he delved more deeply into the nuts and bolts of creating open space networks in subdivisions. Conservation subdivisions have been found more commonly in the East where there is a premium on preserving any possible open space because of the acute loss of agricultural lands and forests, higher population density, and lack of public lands. In the WP region, because of its prodigious landscapes, especially those owned by the federal or state governments or included in Indian reservations, open space may be taken for granted or accepted as a given. Moreover, the existence of low-density rural development where lot sizes of one to 40 acres or greater are the norm could lead one to believe that conservation subdivisions in the west are superfluous. But as stated above, low-density development dispersed over large landscapes does not conserve the values of true open space or agricultural lands, nor will it accommodate the projected influx of new residents. There is a lot of truth in the old saying “too big to mow, too small to grow” with regard to these “ranchette” lots.

Conservation subdivision design, as described by Arendt,refers to residential developments where half or more of the buildable land area is designated as undivided, permanent open space. Though golf course communities may technically meet this definition, they are not typically thought of as conservation subdivisions since, in the arid West, they don’t reflect one of the primary objectives of conservation design – the protection of natural areas.

According to Land Choices, a non-profit organization that advocates for conservation subdivisions they should not be confused with clustering, planned-unit developments, or traditional neighborhood designs. Land Choices also recommends that the overall number of residences allowed in conservation developments should not be increased over that allowed by traditional zoning. However, this planner believes that conservation subdivision ordinances for the West should not necessarily be limited by these parameters or definitions, as long as the benefits of conserving natural open space or agricultural lands can be realized.

A New Twist on Conservation Areas

The Sustainable Sites Initiative is an interdisciplinary effort to create voluntary national guidelines and performance benchmarks for sustainable land design, construction, and maintenance practices. The Sustainable Sites Initiative: Guidelines and Performance Benchmarks 2009 has recently been released and is available free from the Internet. This report contains science-based criteria for sustainable land practices that will enable built landscapes to support natural ecological functions. These practices work by protecting existing ecosystems and regenerating ecological capacity where it has been lost; namely those benefits provided by natural ecosystems such as cleaning air and water, climate regulation, and enhancement of human health. This initiative adds a whole new dimension to the way in which planners and developers design open space in conservation subdivisions. Rather than just conserving pockets of natural open space or agricultural lands, the guidelines encourage the regeneration of ecosystem services within those conservation designs. This requires a more holistic approach to design and should include different experts in hydrology, soils, botany, and ecology to make sure that the highest and best ecological value of a site can be achieved. There are ample opportunities to conserve and regenerate the very best of our landscapes in our region through conservation subdivision design.

The Way of the West

Each jurisdiction that has a conservation subdivision ordinance dictates the amount and type of conservation area for set aside, based on the area’sunique natural features. In Pima County, Arizona,for example, pygmy owl habitat, important mountain peaks, and riparian washes are important candidatesfor conservation, as are archeological sites. In FremontCounty, Idaho, protecting agricultural resources and critical slopes is a primary consideration. The400-year-old traditional acequia agricultural landscape(irrigation canal system) is of great importancefor preservation when designing new residential subdivisions in Rio Arriba County, New Mexico.

Whereas the actual resources sought for protection may be different by jurisdiction, there are some similarities in the way ordinances are implemented. Since conservation subdivisions are by and large voluntary in the West, incentives are necessary to attract developers to this option. Jurisdictions tend to offer administrative flexibility and/or density bonuses as incentives. Flexibility may be expressed in several ways. In some cases, there may be an expedited subdivision review. In other cases, counties may have an allowance for smaller minimum lot sizes in a conservation subdivision than the zoning district would normally permit. In order to set aside at least 50 percent of a property for conservation purposes, the provision of smaller lot sizes becomes necessary to achieve the same yield as a conventional subdivision.

Density bonuses based on the percentage of conservation area are afforded by some jurisdictions as an incentive to do a conservation subdivision. This is particularly attractive to developers not wanting to go through a contentious rezoning process in order to build more units. Cochise County, Arizona, allows a 50 percent density bonus administratively in exchange for 50 percent conservation area, the provision of fire services, and sewer hook-up (no septic systems). Yavapai County, Arizona, has a conservation subdivision option that allows for one-and-a-half to two times the base density based on a developer’s ability to acquire points from a list of sustainable development standards that will be met by the project. Similarly, Fremont County, Idaho, does not specify any density by zoning district but rather calculates it based on the environmental sensitivity of the parcel and the ability of a project to accumulate points under a performance standard.

Conservation subdivisions are a good tool for accommodating the projected new migrants to the rural parts of our region. Protecting values like unfettered view sheds, agricultural and grazing lands, watershed and hydrologic functions, and wildlife habitat and corridors should be paramount in the design of set asides for conservation. This is especially true where these values can be regenerated to improve ecosystem services through sustainable site design. Conservation areas should be functional and networked rather than isolated pockets of green space. Agricultural resources or the potential for new sustainable agricultural operations like community gardens should be taken into consideration.

A good conservation subdivision design will start with the mapping of all environmental features and potential conservation areas in addition to the unbuildable areas of a property before any lots are drawn in. In a review of a number of counties in our region, the required amount of set aside ranges from 40 to 70 percent. In spite of the seemingly endless rural horizons of our region, conservation subdivisions ideally should be developed in close proximity to existing infrastructure, jobs, and services. This can reduce the effect that development has on greenhouse gases through vehicle miles traveled or deforestation.

Conservation subdivisions have fewer impacts on landscapes than the wide dispersal pattern of typical exurban development and have been shown to have more economic benefits than conventional subdivisions. Those benefits include decreased infrastructure costs and higher marketability. Common open space in conservation subdivision developments provides a multitude of potential benefits to residents, including recreational opportunities, community supported agriculture, and a stronger sense of community.

Moreover, the set aside of conservation areas in developments translates into fewer tax dollars spent through open space acquisition programs and fewer dollars spent by jurisdictions to maintain streets and other public services. Where the regeneration of ecosystem services—such as enhancement of aquifer recharge, restoration of grasslands for carbon sequestration and wildlife, enhancement of wetlands for water quality or flood control—becomes an objective of the conservation effort, then a conservation subdivision may realize even more positive fiscal impacts. These ecosystem services all translate into dollars saved in lieu of human engineered alternatives. The natural resources of the West, though seemingly boundless, are too valuable to lose through conventional development practices.