As urban communities grow, design and management strategies for new developments become critical factors that determine impacts on natural resources. How can we accommodate growth and yet conserve natural resources and biodiversity? In this document, we focus on conserving biodiversity when land is subdivided. The term “biological diversity,” or “biodiversity” refers to the variety of life and its processes. Biodiversity includes species diversity, habitat diversity, and genetic diversity. For the purposes of this article, we focus on biodiversity of native species. Native species are plants and animals that were present within a specific region before Europeans made first contact. Non-native, or exotic plants or animals are species that were not present in the region before European contact.

The concept of conservation subdivision has gained traction in many planning and design fields. The goals for conservation subdivisions are twofold: 1) to improve biodiversity within a designated a subdivision, and 2) to minimize development-related impacts on surrounding habitats. Often, though, most of the effort is on the design of the entire site. To conserve and improve biodiversity within urban environments effectively, one must consider three phases of development: design, construction, and post-construction.

The design phase is typically where, among other aspects, lot size and open space are designated, and roads are distributed throughout the site. Goals for the development project are discussed and prioritized. In this phase, homes and lots are placed across the site and the remaining area designated as natural, open space. Basically, everything is laid out on paper and vertical structures, or buildings, and horizontal structures — roads, lots, conserved areas, and shared spaces — are given specific spaces within the development.

Next, during the construction phase, a whole host of built environment professionals such as architects, contractors, and subcontractors take whatever is on paper and implement this on the ground, constructing homes, streets, waste treatment systems, and landscaped areas — sections and parks. In the absence of fully trained or engaged contractors or landscapers, many things can happen during this phase that could impact the viability of onsite and nearby natural habitat. For example, even if the most important large trees are preserved across the subdivision and built areas are designed around them, the placement of topsoil and routes used by heavy construction vehicles could impair the survival of these trees. If heavy vehicles continually run over the root zone of a tree or if topsoil is placed against the tree trunk, the roots may not be able to acquire nutrients, water, and oxygen and may die.

In the final phase, post-construction, buyers purchase the homes, move into the community, and manage their own homes and sections, neighborhoods, and common areas. It is now the responsibility of residents to manage their homes, yards, and neighborhoods in ways that do not compromise the original intent of the community. Additional problems can arise if residents are not fully engaged. Imagine residents moving in and planting invasive exotic plants in each of their yards. Residents could also improperly apply fertilizers and pesticides. The spread of invasive plants and stormwater runoff could then destroy or at least severely reduce the diversity of animals plants found in the conserved areas.

Overall, these three phases must be addressed in order to create and maintain biodiversity within residential subdivisions. A series of EDIS documents, titled “Conservation Subdivision,” discuss biodiversity conservation pertaining to all three phases of development: design, construction, and post-construction. This fact sheet focuses on decisions made in the design phase. During the design phase, people consider what percentage of the site will be conserved as open space. This conserved open space could be any number of patch sizes and shapes. The purpose of this fact sheet is to present how one conserves open space according to ecological principles that maximize biodiversity values.

Patch size, shape, and connectivity are extremely important factors when determining which habitats to preserve for biodiversity. Below are some general design principles that address conserving or creating new habitat for wildlife species that are specialists. Animals that are specialists need a specific type of habitat. Declining wildlife species tend to be specialists as opposed to generalists. Specialists do not do well in fragmented areas consisting of relatively small, isolated patches. Generalists are wildlife species that will eat just about anything and live in a variety of habitats. Think about house sparrows (Passer domesticus) and European starlings (Sturnus vulgaris). These exotic birds are found throughout many countries and are outside their natural range in Europe but seem to do quite well in urban and agricultural areas. Specialists, on the other hand, are much more specialized in their food and shelter requirements. They will sometimes only eat a few types of food and live in only one type of habitat. They do not adapt well to changes in the habitat and will be extirpated, or go extinct locally when their habitat changes. Examples from the United States are most species that are listed on the U.S. endangered and threatened species list — for example, the Florida scrub-jay and the Aphelocoma coerulescens.

Typically, specialists require large patches of connected habitat. However, a planned subdivision may not have realistic opportunities to conserve connected, large patches of habitat. But the conservation of small patches of native habitat could also benefit biodiversity. Each of these small patches would not only contain many native plant species, but also could be used as habitat for a variety of native animals. In particular, small fragments could be used by generalist species and even specialists that temporarily use these patches for refuge when moving across the landscape. For example, some migrating birds would temporarily use native, small urban remnants for shelter and foraging opportunities. These urban remnants would serve as stopover sites that aid birds during migration and help them successfully complete their fall and spring trips. In addition, many insect species are very responsive to small patches of native habitat. Butterflies and even a variety of native bees are known to use native plants found in patches as small as a front yard. Thus, although the principles listed below focus on conserving connected, large patches of habitat, small disconnected patches of habitat also can be used to conserve biodiversity and should be recognized and conserved or restored.

The principles discussed below are centered on conserving wildlife populations, but conserving wildlife habitat also means conserving a diversity of plants. For example, different plants are adapted to the edges of forested patches than are adapted to interior patches. A mixture of large and small patches would provide both interior and edge habitats and therefore would support a variety of plants. If a planned development were to have significant portions of conserved open space, the following ecological principles could be used to help select the sizes and shapes of conserved patches. 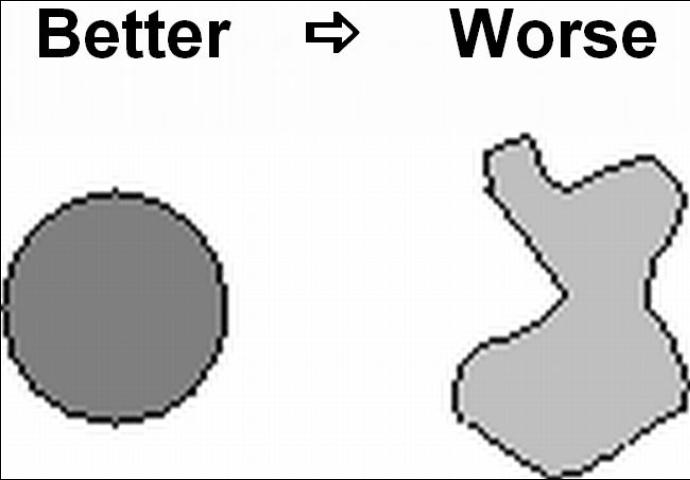 Figure 2. Large patches are better than small. As a general rule, bigger patches tend to have more species. Many species, such as some forest songbirds, primarily live in interior habitat during the breeding season. Generally, interior habitat will begin to appear in a circular preserve when it reaches 8 acres [c. 3 ha] in area — the point at which a circle exceeds 328 feet [c. 100 meters] in radius. How much of a patch is considered edge? Estimates vary, but an edge is estimated to extend 50–100 meters into a patch of habitat. Essentially, microclimatic conditions — including soil moisture and temperature — are different on edges versus. interiors. At 90 acres [c. 36 ha] a circular reserve would contain as much interior as edge habitat. Nevertheless, patch size requirements vary according to factors such as species and natural community type. Even conserving a collection of small patches can help threatened and endangered species. 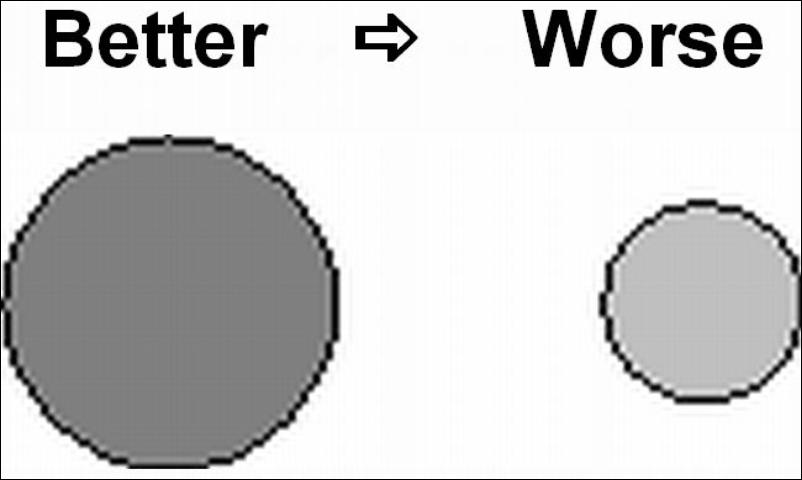 Figure 3. One large patch is better than several small patches with the same total area. Simply totaling the area of preserved wildlife habitat on a development property is insufficient. Small, fragmented patches have more edge habitat and may not provide adequate space to sustain many species. Some animals require large expanses of habitat to survive. For certain species, though, a bunch of little patches of habitat located next to each other is fine. 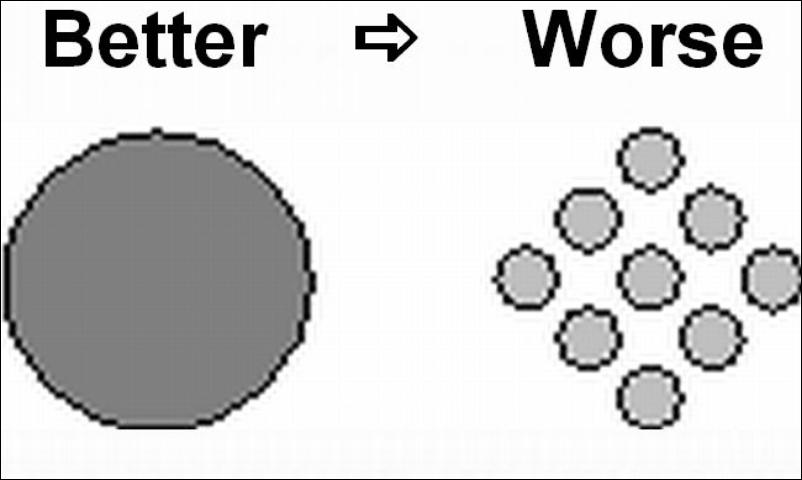 Figure 4. Patches connected by wildlife corridors are better than those left unconnected. Though some debate remains, most evidence shows wildlife corridors play an important role in the survival and stability of individual organisms, single species, and even entire ecosystems. It is best to make efforts to preserve habitat that has functional connections to other existing natural communities. 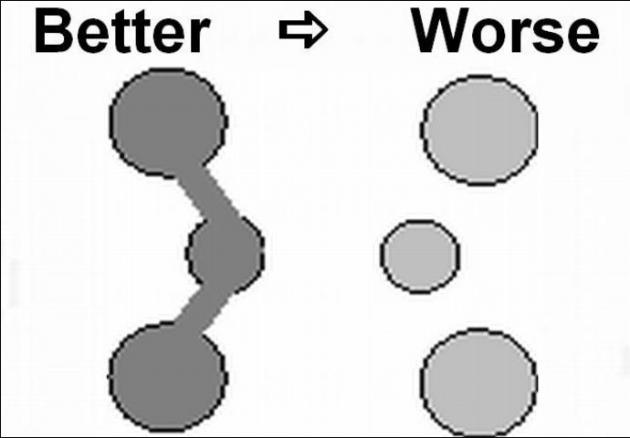 Whenever possible, efforts should be made to coordinate habitat preservation with adjacent landowners. This can help to create a matrix of natural areas suitable for both localized and wide-ranging species. Linear corridors are particularly important for walking animals such as mammals, lizards, and turtles. When incorporating wildlife corridors into land management plans, use the following general rules:

Another option is mixed-species corridors allowing for some areas of indigenous dominance, some of exotic species, and other stretches with a combination — again reflecting the diverse heritage of the land. Predator control may be needed along these connective corridors since they may be used by pests as well as by native wildlife. In addition, these corridors could facilitate the movement of invasives, and care is needed to be aware of and monitor the potential spread of weed plants from other areas.

For additional information on conservation subdivisions and conserving urban biodiversity, a variety of online guides, books and other publications exist.

Hostetler, M.E. and C.S. Holling. 2000. Detecting the scales at which birds respond to structure in urban landscapes. Urban Ecosyst. 4, 25–54.

1. This document is WEC275, one of a series of the Wildlife Ecology and Conservation Department, Florida Cooperative Extension Service, Institute of Food and Agricultural Sciences, University of Florida. Original publication date December 2009. Visit the EDIS Web Site at http://edis.ifas.ufl.edu.